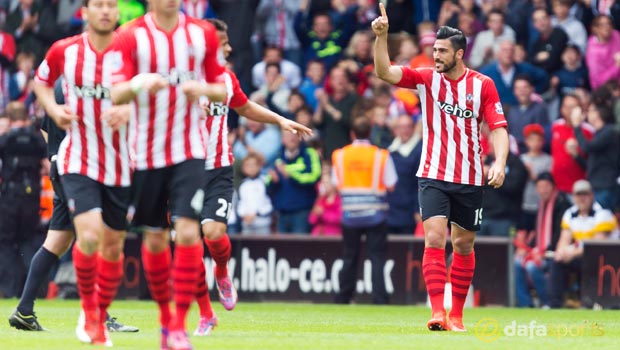 Graziano Pelle does not want to leave anything to chance as Southampton chase European football.

Ronald Koeman’s side had been top-four contenders for much of the season but the Europa League now looks a more likely target, although they are not mathematically out of the running for a Champions League spot just yet.

Saints are currently seventh in the Premier League table but only the top six are guaranteed European football at this stage.

The St Mary’s side missed out on the chance to leapfrog Spurs on Saturday as they were held to a 2-2 draw by the side one point and one place above them in the table.

Pelle, who twice put his side ahead on Saturday, was left disappointed by the draw but he has now urged Southampton to finish the season as strongly as possible as they battle for European football.

He told the club’s official website: “Personally, as a striker, it was important to get two goals for my team, but it’s always nicer if we win.

“We are a bit frustrated that we lost two points because they would have been really important for the rest of the season. We came here to win the game.”

If Arsenal beat Aston Villa in the FA Cup final, seventh spot will be good enough to secure Europa League qualification – but Pelle wants Saints to finish the job themselves, rather than having to cheer on the Gunners at Wembley.

He added: “Now we have to be positive until the end of the season. We have to try to believe.

“There are still four games to go and a lot of points still, so we have to try to get the maximum result to get as high as possible.”

Southampton can still gatecrash the top four but it would probably take maximum points from their remaining games, as well as relying on results elsewhere going their way.

Saints are 67.00 to finish in the top four and 2.05 to beat Sunderland in the next round of Premier League games.