Barcelona knocked out of the Europa League by Eintracht Frankfurt 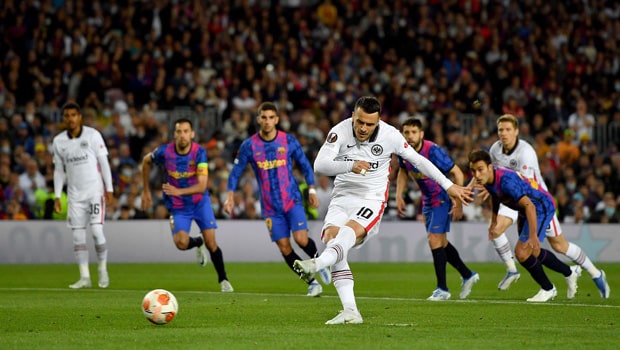 FC Barcelona was knocked out of the UEFA Europa League on Thursday when they were beaten 3-2 by German side Frankfurt.

Both teams played a 1-1 draw in the first leg last week and went into the weekend, winning 3-2 against Levante in the La Liga, while Frankfurt lost at home to Freiburg 1-2.

Xavi’s side was on a 15-match unbeaten run before the fixture on Thursday night, but Frankfurt led just after 4 minutes as Filip Kostic scored from the spot.

Eric Garcia was penalized after he brought down a Frankfurt defender in the second minute of the game. The former Manchester City got yellow carded and would miss Barcelona’s next European game.

Kostic turned provider for Colombian forward Rafael Borre in the 36th minute to make it 2-0 before halftime. Kostic made his brace in the 67th minute to put the game and tie beyond Barcelona.

However, Barcelona had a glimmer of hope when they pulled one back with six minutes left to play, only for the video assistant referee to cancel out Sergio Busquet’s efforts.

Nevertheless, there was time for two goals as Sergio Busquets finally got his goal in the 91st minute before Memphis Depay’s penalty late into stoppage time was mere consolation in the 4-3 aggregate loss.

Camp Nou was washed with white as the German fans made their presence felt at the stadium, and this has caught Xavi by surprise, implying that Barcelona would look into what made the situation so.

Barcelona will now focus on the La Liga, where they currently sit second on the table. Xavi’s side will now face Cadiz and Real Sociedad in their next La Liga games.