Mick McCarthy: Plan is to attack 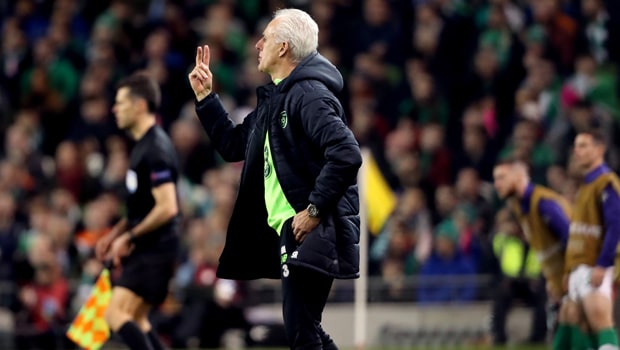 Republic of Ireland boss Mick McCarthy has promised his side will approach Friday night’s Euro 2020 qualifier in Denmark in a ‘very attacking, aggressive way’.

The Irish boss does however concede he’d happily accept a draw from the trip to Copenhagen. His side have taken maximum points from their opening two Group D games against Gibraltar and Georgia, giving McCarthy a perfect start to his second stint as Ireland manager.

The Danes picked up a dramatic point in Switzerland in their opening game, coming from behind to snatch a 3-3 draw. “I’d be thrilled with a draw,” said McCarthy. “If I’d been offered a draw, I wouldn’t have got on the plane. I’d have stayed at home, took the point and played against Gibraltar [on Monday night].

“That doesn’t mean to say we’re coming here just to sit back and try to get a draw. We’re coming here to try to win a game and we’ll approach it in a very attacking, aggressive way.”

The game at the Telia Parken Stadium will be the fifth between the sides in a little more than 18 months, with three of the previous four having ended scoreless. Danish midfielder Thomas Delaney has described Ireland as Denmark’s ‘most annoying opponent’, something McCarthy has no issue with.

He added: “I doubt it was a compliment that, was it? Was it said in a derogatory way or a complimentary way? “Oh well, that’s kind of him then, and I hope we are as annoying to him [this time] as well. “The pressure is on both of us, isn’t it? But it’s their home game, so there’s a weight of expectation.”