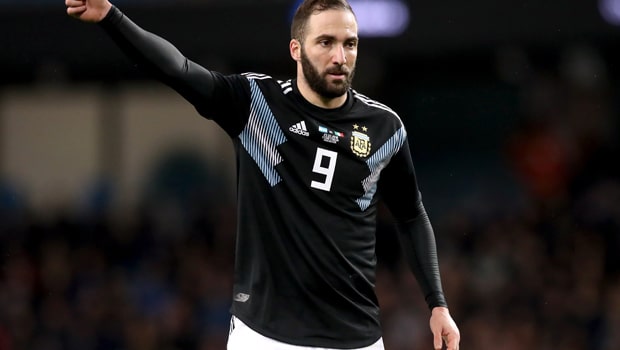 Argentina striker Gonzalo Higuain has confirmed he has retired from international football as he prepares to focus on his club career with Chelsea.

The 31-year-old made 75 appearances for the South American giants, scoring 31 goals in the process.

With his club career now at a crossroads, Higuain has decided that he would rather retire, with his last appearance for the Albiceleste coming in a 2-1 win over Nigeria in the World Cup last June.

Explaining his decision in an interview with Fox Sports, Higuain said: “My time with Argentina is over. Thinking things through in depth, my time is up.

“To the delight of many, now I will only look at it from the outside. I have spoken to (manager Lionel) Scaloni and told him my point of view.

“I’ve made the decision because I want to enjoy my family, I want to spend time with my daughter, and at the same time, I feel that I gave my country everything I could.”

Higuain joined Chelsea on loan in January and he has scored three goals in 10 appearances since leaving Juventus for a second time. When asked about his club future, he told reporters: “I’m fully focused on my commitment to Chelsea.

“The Premier League is amazing and I really want to enjoy it. It’s very competitive indeed.”

Higuain will be hoping to make a big impression in Sunday’s clash with Cardiff in Wales. The Bluebirds are 7.50 to win, with the draw 4.50, while Chelsea are 1.44 to grab all three points.