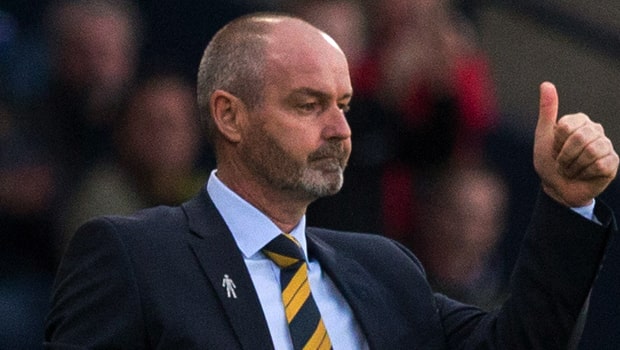 Steve Clarke paid tribute to the spirit of his new Scotland team after his managerial reign began with a dramatic 2-1 win over Cyprus at Hampden Park.

Oliver Burke’s late winner gave the Scots a vital Group I win in Glasgow, enough to keep them level in the section with second-placed Russia – who thumped San Marino 9-0 – and three points behind leaders Belgium.

Having lost their opening game 4-0 to Kazakhstan under Alex McLeish, Scotland could ill afford a slip up on home soil against the Cypriots.

They were sent on their way by a thunderous strike from skipper Andy Robertson on the hour, but appeared to have been caught napping when Ionnis Kousoulos was left unmarked to head in from a corner with three minutes to play.

To their credit Scotland responded. Ryan Fraser’s teasing cross from the left was headed goalwards by substitute Oliver Burke. The ball rebounded off the base of a post but broke perfectly for the waiting Burke to volley it back into the net.

Clarke will now take his side to Brussels to face the Belgians on Tuesday and he says he couldn’t have asked much more of his players in what a high-pressure game for them.

“We knew if we didn’t get maximum points, the group was almost beyond us,” Clarke said. “It’s difficult for me to be too critical of the players after I asked them to give me a win. They gave us three points in a game that came with big pressure.

“Lots to work on, for sure, but let’s just enjoy the win and then we’ll work on the next game. “I thought we had really good control of the game. I couldn’t see Cyprus scoring from open play. Unfortunately, we switch off from a set-play and get punished.

“But, after that, the character and resilience. It would have been easy for them to feel sorry for themselves but they didn’t and I think that bodes well for the future.”