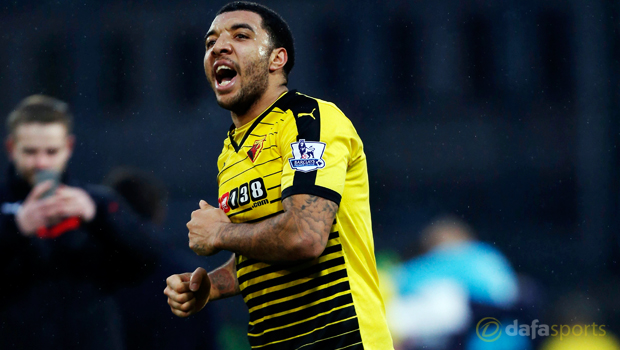 Quique Sanchez Flores believes Watford captain Troy Deeney has all the attributes to make him an England striker of the future.

The 24-year-old scored a brace on Saturday as the Hornets overcame Crystal Palace at Selhurst Park.

Deeney was fouled for the early penalty that gave Watford the lead. He dusted himself off to score and, after Emmanuel Adebayor had levelled the game, the big striker showed neat control to finish past Wayne Hennessy with eight minutes remaining to win the game.

Flores says Deeney has what it takes to fit into any team, including at international level.

He believes his skipper could compliment the likes of Harry Kane or Jamie Vardy if selected.

“But I want to stop about that, because I am not the manager of the national team, I respect [Roy] Hodgson a lot.”

Alongside in-form duo Kane and Vardy, the England manager also has captain Wayne Rooney, while Liverpool’s Daniel Sturridge and experienced Arsenal frontman Danny Welbeck are pushing for inclusion in his Euro 2016 squad this summer.

Flores insists Deeney has the personality to fit right in wherever he goes. Deeney has now scored nine goals this season but his link-up play with Odion Ighalo has helped his partner score 15 times. His unselfishness in front of goal is a key trait, according to the Watford boss.

“[He] has an amazing personality. He is not just a striker for us. He started the season as a striker, then as a second striker, and now he’s playing for the system,” added Flores.

“It’s not just like a striker, his value for the collective, his work-rate, pressure, defending deep, interceptions, he’s a very important player for us.”