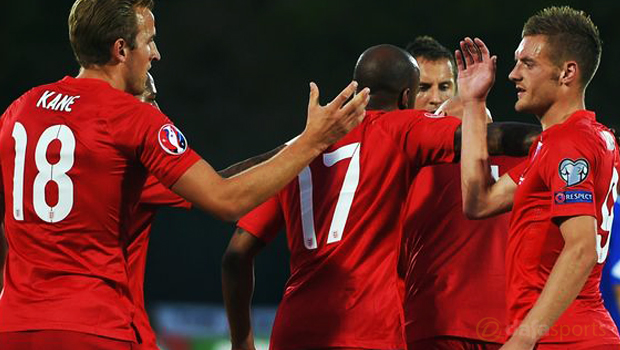 Tottenham boss Mauricio Pochettino believes Harry Kane and Jamie Vardy could play up front together for England at Euro 2016.

Kane has been a revelation for Spurs since being given a regular starting berth for the north Londoners and has bagged 14 goals in all competitions this season to date.

The 22-year-old struck 31 times last term and has now earned eight caps for the Three Lions, scoring three goals in the process.

Whether England boss Roy Hodgson sees him as a starter next summer only time will tell but it seems inevitable that the Chingford-born hitman will be on the plane to France for the showpiece event.

The make-up of the forward line is unclear, however, with doubts over whether captain Wayne Rooney will play up front or in a deeper role, while Vardy will need to keep scoring goals and impressing Hodgson to stake his claim.

The Leicester man has certainly been doing that so far this season, with a record-breaking run of goals that has seen him notch 15 in 16 top-flight appearances.

The two men will go head-to-head on Wednesday night as the Foxes travel to White Hart Lane to take on Spurs in the Premier League, with the hosts on offer at 1.75 to take all three points and Leicester priced at 4.75.

The outcome of the game might well rest on which striker performs the best and it will be an opportunity for Hodgson to see his potential Euro 2016 strike-force in action on the same pitch.

Whether or not they are on the same side in about six months’ time remains to be seen but Pochettino is adamant that it could work.

“They have quality enough to play,” he said. “I think that both show unbelievable skills and why not, maybe Roy can decide to put them both together. Why not? I think they have the skill to do it.”