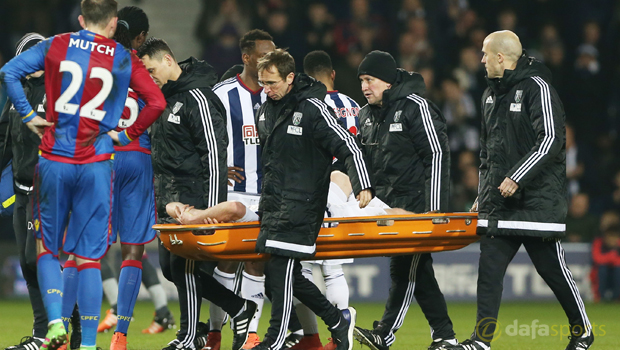 Midfielder Chris Brunt has been ruled out of Euro 2016 after sustaining cruciate ligament damage in West Brom’s 3-2 win over Crystal Palace.

Brunt, who was one of the stars of Northern Ireland’s qualification campaign, is facing the prospect of a lengthy spell on the sidelines with the serious knee injury.

The news of the injury was confirmed yesterday, according to the Belfast Telegraph, and his absence leaves coach Michael O’Neill without one of his most experienced campaigners and biggest stars as Northern Ireland head to a major tournament for the first time in 30 years.

The 31-year-old was a regular in the Euro 2016 qualification campaign and has managed 54 caps for his country since making his debut in 2004.

In the last Northern Ireland squad, for the friendly against Latvia in November, only Chris Baird, Gareth McAuley and captain Steven Davis had made more appearances than Brunt.

Brunt now faces around nine months of recovery time and so could be missing for Albion until December or even early 2017.

Meanwhile, O’Neill will be hoping his other key men avoid serious injury as he has a small pool of players to choose from for the European Championship.

Few expected Northern Ireland to qualify for the tournament this summer and they arguably face an even greater task to emerge from the group stage after being drawn in Group C alongside Germany, Poland and Ukraine.

Northern Ireland open their Euro 2016 campaign against Poland on June 12 and they are 4.20 to kick off their tournament with a win. The Poles are 1.80 to come out on top and the draw can be backed at 3.25