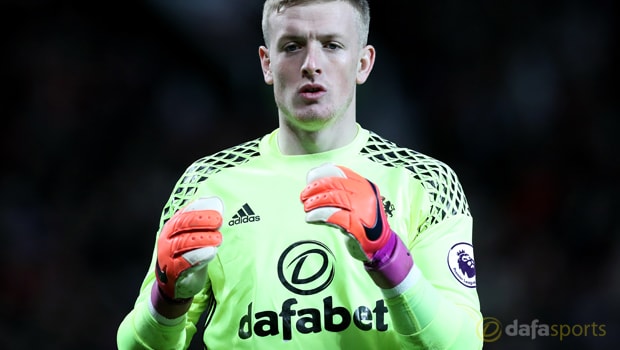 Sunderland boss David Moyes has warned goalkeeper Jordan Pickford that he may risk his development if he leaves the club for a bench role next season.

The 23-year-old has been one of the few standout performers for Sunderland this season, although even his heroics between the sticks have not been enough to keep the Black Cats in the Premier League.

Pickford’s form saw him earn his first senior international call-up with England in October, while he was also nominated for the PFA Young Player of the Year despite missing two months of the season with a knee injury.

The stopper is now being tipped to leave the Stadium of Light during the summer, with a number of clubs believed to be interested in his services, but Moyes has warned the youngster that he risks hindering his development if he becomes a team’s backup goalkeeper.

“At the moment, I really wouldn’t know,” Moyes said when asked about Pickford’s future.

“Obviously it’s up to the club. “If Jordan was to go elsewhere and not be the No 1, that wouldn’t be good for him because that would affect his progress.

You can see what he does for us with the saves he makes. He’s been outstanding from day one.”

Pickford is under contract with Sunderland until the summer of 2020, while he is also a supporter of the club, and Moyes hopes these factors will contribute to his number one remaining at the Stadium of Light next season.

“I think that would be a telling factor if the alternative was to go and sit on the bench somewhere else,” Moyes added.

Sunderland still have three matches to play this season, starting with Saturday’s home fixture against Swansea.