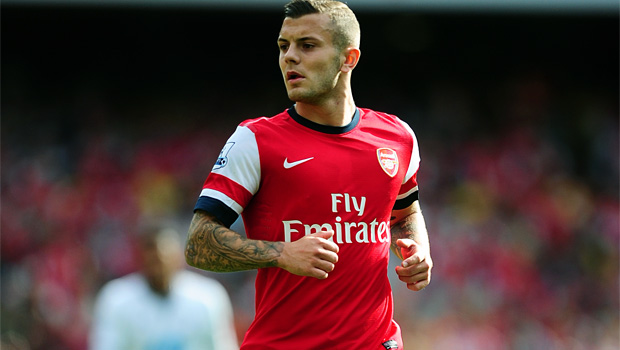 England have been boosted by the news Jack Wilshere will be fit for the crucial 2014 World Cup qualifiers against Moldova and Ukraine.

Wilshere was forced to leave the field just before half-time as Arsenal defeated Tottenham 1-0 on Sunday, sparking fears he could miss the double-header for Roy Hodgson’s men.

However, Gunners boss Arsene Wenger says the player just had a stomach bug and will be fine to report for England duty later in the week.

“He has a stomach bug, but nothing that will stop him from playing for England,” Wenger revealed after the game.

The news will come as a relief to Hodgson, who is already without a number of key men for both games.

Manchester United star Wayne Rooney is set to miss out after he suffered a nasty head injury in training on Saturday that forced him to sit out Sunday’s defeat to Liverpool.

Fellow United star Phil Jones has also been forced to withdraw from the squad after picking up a knock at Anfield, along with Liverpool defender Glen Johnson, who limped out of the action in the second half.

Liverpool striker Daniel Sturridge, who grabbed the only goal of the game, has been struggling with a thigh injury and although he says he will be fit, but manager Brendan Rodgers is not so sure.

“He has struggled in the last couple of games and we need to think of Liverpool first,” said Rodgers.

England currently trail Montenegro by two points in Group H with a game in hand and are only one point ahead of Ukraine.