England and Ireland draw at Wembley 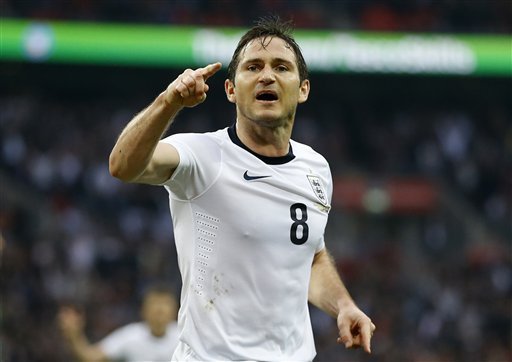 Frank Lampard’s goal erased a 1-0 deficit for England as they drew 1-1 against Ireland.

Ashley Cole featured as the team captain after winning his 100th cap last autumn, but the visitors celebrated early with a Shane Long header.

Chelsea midfielder Lampard found a way to score and keep things level, but David Forde was a force in front of Ireland’s goal to keep England’s winless streak against the Irish alive since 1985.

In the very first chance of the match, Ireland took the lead as Long capitalised on slack defending by Glen Johnson to head in a shot beyond Joe Hart from Seamus Coleman’s cross.

It took 10 minutes to find an equaliser as the Three Lions attacked on Ireland’s own weak defending as Daniel Sturridge found himself with space enough to cross for Lampard to flick home.

However, the Liverpool forward’s night came to a halt as he was stretchered off just past the 30-minute mark and replaced by Jermain Defoe.

Both teams had more scoring chances before the end of the first half but neither could muster enough to take the lead.

In the start of the second frame, Cole almost scored his first international goal, but was stopped by Coleman and Sean St Ledger.

Cole was substituted off the game just before the hour mark, replaced by Leighton Baines.

More chances from Defoe and Theo Walcott, but Forde was in excellent form and turned away their attempts.

Ireland substitute James McClean struck a free kick towards the box before Ben Foster, who made his first appearance since 2010 and coming on at the half to replace Hart, was saved by the offside flag after a blunder due to a deflected cross.

The Three Lions had chances to snatch the victory in the last 10 minutes, but could not beat Forde.