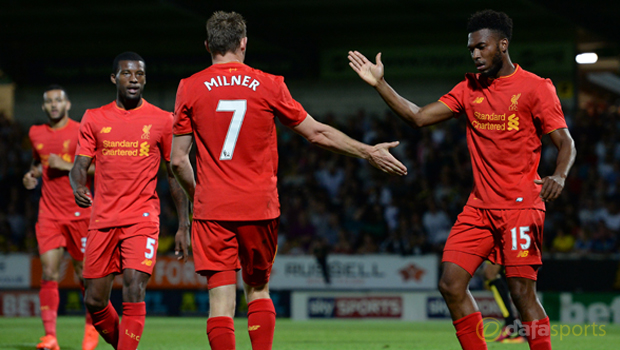 Daniel Sturridge believes Liverpool’s classy performance in their 5-0 win in the EFL Cup at Burton shows just how hungry they are to succeed.

Following Saturday’s 2-0 defeat to Burnley, Jurgen Klopp fielded a strong side at the Pirelli Stadium and they wasted little time in finding their rhythm as goals from Divock Origi and Roberto Firmino saw them go in 2-0 up at the break.

An own goal from Tom Naylor just after the hour made the result safe before substitute Sturridge grabbed a brace to see his side home 5-0.

With no European football on the agenda this season at Anfield, the Reds have more time to dedicate themselves to potentially winning domestic silverware.

Sturridge was full of praise for the hunger his side showed in Staffordshire on Tuesday and following their embarrassment at Turf Moor, believes they have proved to some of their doubters just how much they want to win every game.

“It was a great team performance and it’s good to get the victory,” he told the club’s official website.

On his teammates’ hunger, Sturridge added: “We’re like that all the time, we always want to try to keep scoring goals, keep performing, and keep making the results as good as possible.

Liverpool travel to Tottenham on Saturday, a game they are 3.00 to win, with the Lilywhites the 2.40 favourites and the draw priced at 3.40.