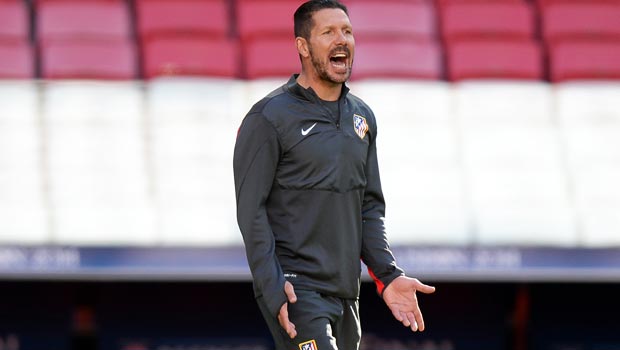 Atletico Madrid boss Diego Simeone has quashed speculation suggesting he is keen to leave Vicente Calderon in the near future.

The 44-year-old former Argentina international has been linked with the managerial positions at both Manchester City and Paris Saint-Germain but insists he has no intention of leaving last season’s La Liga winners and Champions League finalists.

Simeone has been in charge at Atletico since 2011 and, as well as last season’s amazing successes, had also guided the club to glory in the Europa League, the Copa del Rey, Uefa Super Cup and Spanish Supercopa.

Atletico president Enrique Cerezo had dismissed the rumours over the weekend, and Simeone himself has now told Spanish newspaper Marca: “I feel very good at Atletico. I always want to continue improving, I’m never satisfied. I don’t know what the limit of this team is, I will continue looking.

“The happiness of completing three years at a club that I love so much is huge. I always think they can get rid of me, (but) I’m only thinking about Malaga on Saturday.”

Atletico are 1.45 to beat Malaga who are 6.36 to take the three points from the clash.

Atletico were beaten 2-1 by Real Sociedad, David Moyes’s new side, before the international break and are currently fourth in the table, four points behind leaders Real Madrid.

They currently top their Champions League group having taken nine points from their first four matches. Atletico lost 3-2 in their first match in Greece against Olympiacos, but have responded well to that setback, beating Juventus 1-0 before completing the double over Malmo.