No ‘confidence issues’ for Canaries 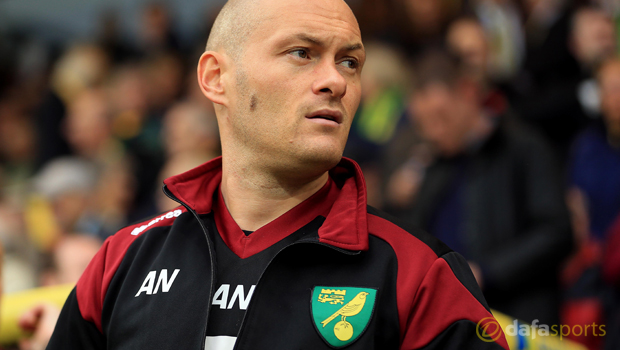 Norwich have lost four Premier League games in succession but boss Alex Neil insists there is no crisis of confidence at Carrow Road.

The Canaries started the season brightly following last year’s promotion but they have dropped down to 16th in the table after failing to take any points from their clashes with Leicester, Newcastle, West Brom and Manchester City.

Neil’s side did perform admirably last time out against title chasers City as Cameron Jerome’s 83rd minute effort nearly secured draw, before Yaya Toure’s late penalty denied them a share of the spoils, and the Norwich boss insists confidence remains high within his squad.

“I don’t think there are any confidence issues. If you win, you are happy, if you don’t, you are not,” he told the Eastern Daily Press. “It makes you angry and frustrated, as you can probably tell from my face at the moment. We have to take the pain into the next game and make it better. I just think we chucked away a point (at Manchester City) because we had it in our own hands and that is where the frustration lies.”

Norwich host Swansea in the Premier League on Saturday and are 2.60 to secure the win, and Neil doesn’t think the manner of the defeat at City will have any impact on his players when they take on the Swans.

He added: “It won’t take a time for us to get over it, no. We’ll do what we always do, which is go through it, analyse it and we have been saying this for a number of weeks but there has been a lot of positive stuff again we did in the match.

“At this level the opponent is so good they are always going to create a chance or two, but it is about limiting those from our point of view.

“I think we have gone through a spell where we come out of games saying we have played reasonably well but we haven’t done this or that. Ultimately we have to take those chances and be a bit more resolute at the back. It really is pretty simple.”

Norwich are 2.25 to be relegated, while fellow newly-promoted sides Bournemouth and Watford can be backed at 2.10 and 10.00 respectively.