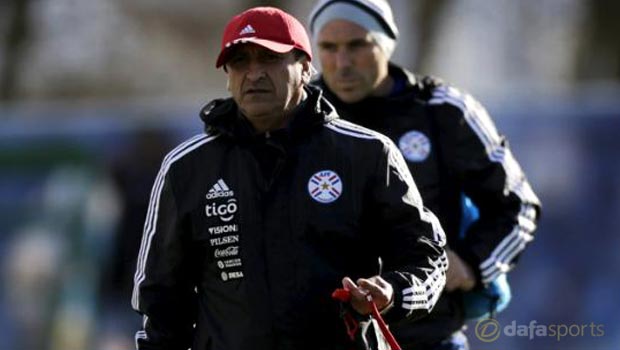 Coach Ramon Diaz praised his Paraguay players after they showed their capabilities by dumping Brazil out of the Copa America on penalties in Saturday night’s quarter-final showdown.

Brazil were on course to set up a mouth-watering semi-final showdown against rivals Argentina when 31-year-old Robinho, who was in the side for suspended star man Neymar, scored the first goal for his country since 2010 after just 15 minutes.

But Paraguay hit back to level 18 minutes from time with a penalty from Derlis Gonzalez after a handball by Paris Saint-German defender Thiago Silva.

In the shoot-out Brazil missed twice, while former Manchester City hitman Roque Santa Cruz also missed for Paraguay, but Gonzalez again kept his cool to convert his spot-kick and send them through.

Paraguay will be full of confidence ahead of Tuesday night’s semi-final given that they are still unbeaten in the tournament and, in addition to knocking out Brazil, they also drew 2-2 with last-four opponents Argentina and 1-1 with Uruguay in the group stages.

“The players, the directors, everyone here is very happy. This is very important for us – a great step to carry on believing in this project,” Diaz said after the game.

“You have to have a lot of respect for this team. The players have shown the fans just what they are capable of doing.”

Looking ahead to facing his homeland Argentina in the semis, Diaz added: “Argentina are the best national team in the world. We know them well and there won’t be much time to enjoy this special moment.”

The winners of the game will face either hosts Chile or Peru in the final. The Chileans are 1.50 to win their semi-final, while Peru can be backed at 8.00.