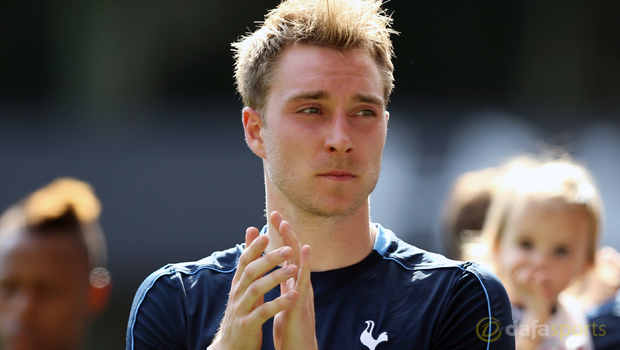 The Dutchman recently joined Spurs from AZ Alkmaar for £18.5 million after netting 31 goals in 49 appearances in all competitions last season.

After impressing off the bench in the opening weekend draw at Everton, the striker looked dangerous when given the nod alongside Harry Kane in Saturday’s 1-0 win over Crystal Palace.

The 22-year-old is still to open his account at White Hart Lane but is expected to be given plenty of chances to shine this season, with boss Mauricio Pochettino likely to rotate his troops to ensure his squad remains as fresh as possible.

Tottenham’s lack of a second frontline striker hindered their title chances last season and Janssen’s arrival could be exactly what they need.

The Netherlands international’s robust style of the play means it appears he has all the attributes to thrive in England and Eriksen is in no doubt that he can be a shining light for the club once he fully settles.

“With Vincent, he’s something different – even though he’s from Holland, he’s proper English,” said Eriksen.

Of course it’s the beginning for him, he wants to show everyone that he can play football and he’s done that.

“For him it’s about getting his confidence and with a bit of luck he’ll be scoring.”

Tottenham are currently priced at 13.00 to win the Premier League, while they are 2.20 to finish in the top four.