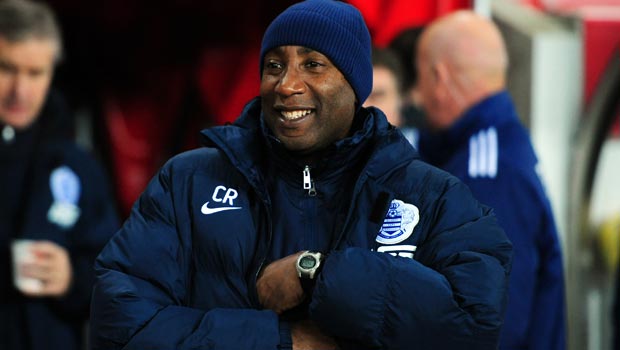 Queens Park Rangers boss Chris Ramsey has given his players a target to pick up a minimum of 15 points from their remaining 13 matches to secure Premier League survival.

The 52-year-old has been handed the task of ensuring the R’s don’t drop back into the Championship after one season in the top flight following last May’s play-off final win against Derby County at Wembley.

Ramsey, who was the academy coach at Loftus Road this season, was put in caretaker charge when Harry Redknapp resigned on February 3.

QPR lost at home to high-flying Southampton in his first game in temporary charge, but then went to Sunderland last Tuesday and secured their first away points of the campaign at the 12th attempt with goals from Leroy Fer and Bobby Zamora sealing a 2-0 win at the Stadium of Light.

It was enough to take the R’s out of the bottom three on goal difference at Aston Villa’s expense and also persuaded the club’s owner, Tony Fernandes, to hand Ramsey the job until the summer.

And ahead of Saturday’s trip to fellow strugglers Hull City, Ramsey feels his side should stay up if they can add at least 15 points to their current tally of 22.

Speaking on talkSPORT, he said: “There is always the magical points [target] you try to get between 37 and 40.

“It is a cliche but you have got take each game as it comes and try to make sure whatever happens you try and get a result in every game.

“The other teams have got their games to deal with and we don’t really focus on what is around us. We just know if you get between 37 to 40 points, there is a good chance you will stay up.

“It is going to be very tough, but I think the players have got the bit between the teeth.”