Chelsea goalkeeper Thibaut Courtois refusing to get carried away 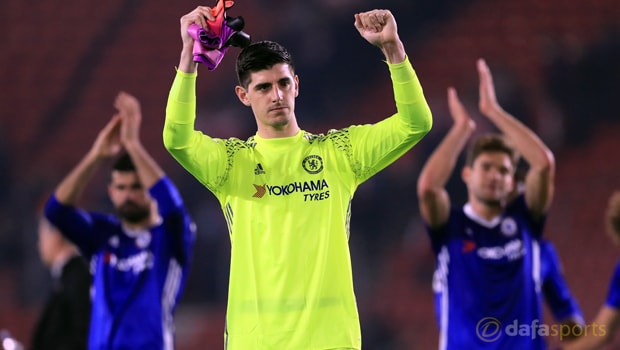 Chelsea goalkeeper Thibaut Courtois is adamant that it is still too early to describe his side as Champions-elect, despite their six-point lead at the top of the Premier League table.

The Blues, 1.44 favourites to win the league, enjoyed a brilliant first half of the season and they are still flying high with their rivals unable to significantly cut the gap.

Liverpool had the chance to reduce the deficit on Sunday but they were beaten at home by Swansea, while Tottenham and Manchester City played out a 2-2 draw.

Manchester United were unable to beat Stoke, needing a last-gasp equaliser to salvage a point, so Antonio Conte’s men are still way out in front.

Chelsea can extend their lead with victory against Hull on Sunday, a game in which striker Diego Costa could be set to return to the fold.

The former Atletico Madrid man missed last week’s win over Leicester through injury, although speculation claimed he had asked to leave the club to make a lucrative move to China.

His return could give Conte’s men a huge boost but Courtois is refusing to believe his side have one hand on the trophy.

He told Sky Sports: “If you’re on top they will say that, but there’s still 17 games to go and a lot of points to win and lose.

“Obviously this month is important for us. You have two big games coming up after Hull with Liverpool and Arsenal.

If you can get a good result against both of those teams you make the gap maybe bigger. “There is still a long way to go.

Top games is one thing, but going away to Stoke or Burnley are difficult games where you can lose points.”