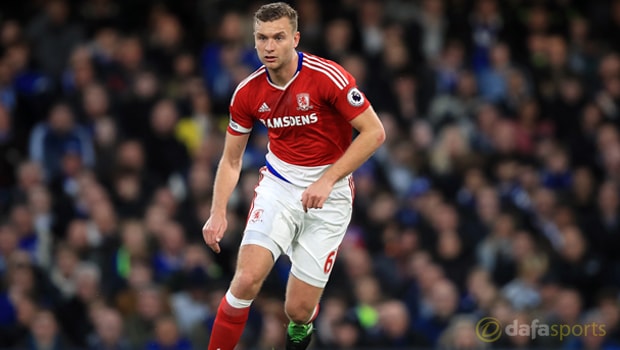 Middlesbrough defender Ben Gibson admits his side have not been good enough this season after relegation from the Premier League was confirmed following their 3-0 defeat at Chelsea.

Boro went into Monday’s match at Stamford Bridge knowing they needed to pick up at least a point to keep their faint hopes of remaining in the top flight alive, but they were outclassed in every department by the champions-elect.

Steve Agnew’s men have now been consigned to the Championship again after just one season and centre-back Gibson concedes it is the lowest point in his career.

“From top to bottom we haven’t been good enough. Players, staff, myself.[Chelsea] were much better in every department.

It means that much.” The 24-year-old did praise the travelling Boro supporters for sticking with the team during Monday’s defeat and believes it is imperative the club bounce back as quickly as possible.

“The fans didn’t stop singing, wherever we’ve been this season, they’ve been the same,” Gibson added.

“The fans deserve Premier League football and we have to find a team to do that. We have to reflect on what’s gone wrong.”

Boro have two matches remaining before they can start planning for next season, with their final home game against Southampton set to take place on Saturday.

The Teessiders are priced at 3.80 to win the match while Southampton are available at 2.05. The draw is on offer at 3.50.