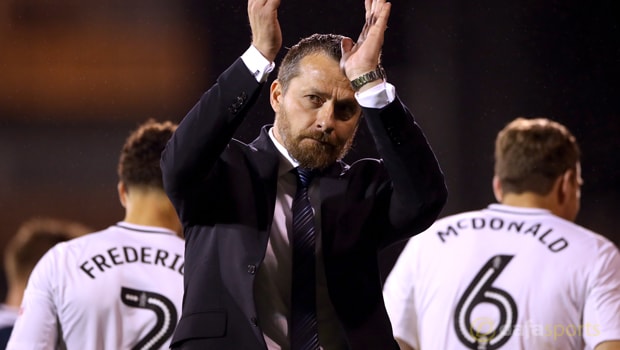 Slavisa Jokanovic hailed the performance of his Fulham side after they booked their place in the Championship play-off final following Monday’s win against Derby.

The Cottagers went into the second leg of their semi-final tie at Craven Cottage trailing 1-0 from the reverse fixture and the nerves were beginning to jangle as they failed to make the breakthrough during a goalless first half.

However, Fulham were the dominant side and second-half strikes from Ryan Sessegnon and Denis Odoi were enough for Jokanovic’s team to secure a 2-0 victory on the night for a 2-1 aggregate success.

Fulham will now face either Aston Villa or Middlesbrough in the play-off final on May 26 and Jokanovic was quick to praise the quality his side showed throughout Monday’s second leg.

“We played fantastic football, we controlled everything, created many chances and didn’t give them many opportunities,” Jokanovic was quoted as saying on Sky Sports.

“In the first half we were unlucky but in the second half we pushed stronger and scored two fantastic goals. We’re very satisfied for the team and for our supporters, who deserve one of these nights.”

The former Watford boss insists the hard work is just beginning as a trip to Wembley will count for nothing if it does not end in Fulham’s return to the Premier League.

“We’ve beaten many records this year and we’re really proud and happy, but we know it’s not enough yet just to take the fans to Wembley,” the Serbian added.

“We need to start working for this game because the whole season will depend on it.

“It’s important we show enough quality and confidence to win the game but for now we’ll clear our minds and rest our bodies to prepare.”

Fulham have not played in the Premier League since their relegation in 2014. They are priced at 1.73 to earn promotion back to the top flight this term.