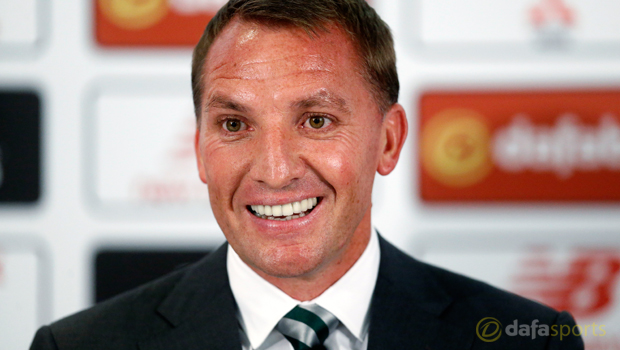 Celtic manager Brendan Rodgers insists there is no ’embarrassment’ after his side were beaten 1-0 by Gibraltan champions Lincoln Red Imps in the first leg of their Champions League qualifier on Tuesday.

Lee Casciaro’s strike just after half-time was enough to hand the part-timers an historic victory at the Victoria Stadium, in what was Rodgers first competitive match in charge of the Hoops since succeeding Ronny Deila in May.

Leigh Griffiths twice hit the woodwork as the Glasgow giants tried to force their way back into the game, but they will now have to overturn a first-leg deficit in the reverse fixture at Celtic Park on July 20.

Despite the defeat, former Liverpool boss Rodgers insists his side should not feel embarrassed, as he believes it was tough match in testing conditions. He said: “There is no embarrassment. It was a tough game in tough conditions.

We didn’t take our chances, they took their chance.” “We dominated and created enough chances to score.

Sometimes it can happen, obviously with the pitch, an awkward bounce and all of a sudden the player is in, it’s into the floor and goes in.”

The 43-year-old remains convinced his side will still progress through to the third qualifying round, although he conceded that his first competitive match in charge had ended in disappointment.

He added: “We have seen enough to see that we can get through in the second leg. Of course you are disappointed to lose.” Celtic are set to kick-off their Scottish Premiership defence in less than a month’s time, when they take on Heart of Midlothian at Tynecastle on August 7.

Rodgers’ men are available at 1.60 to begin their league campaign with a victory, while Hearts are on offer at 5.00 and the draw is priced at 3.75.