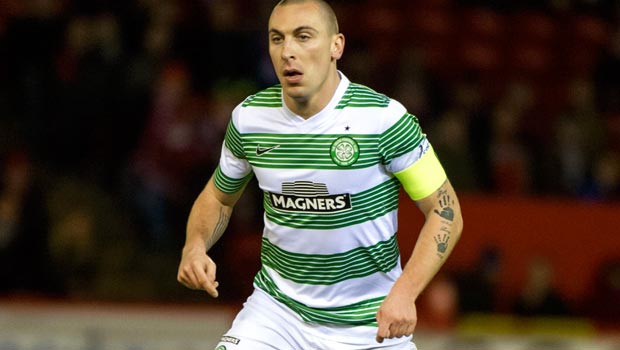 Celtic captain Scott Brown is confident his side can progress past Legia Warsaw in their Champions League third qualifying second -leg clasg on Wednesday, despite going into the match trailing 4-1 from last week’s first game in Poland.

The Scotland international is currently sidelined with a hamstring injury and will be unable to feature in the match at Murray field having also missed the first leg and the previous two-legged qualifier against Reykjavik.

It will be a tall order for the Scottish Premiership champions to keep alive their hopes of reaching the lucrative group stages of the Champions League after the first leg debacle in which Ronny Deila’s men were also reduced to ten men after Efe Ambrose was red-carded just before half-time.

However, Brown pointed to 12 months ago when they fought back from a 2-0 first-leg deficit to secure a 3-0 home win against Shakhter Karagandy.

“It’s going to be hard because we need three goals but I believe we can do it,” he said.

“The Shakhter game last season was huge for us – we scored three goals then and we have to do it again this week. It always hurts when people write you off, but that’s football.

“People always write you off. That’s when you have to put the wrongs right and go out there and show everyone what you can do. You can prove a point to everyone out there on the field.

“Everyone knows it was a disappointing result in Poland and it was hard to take but we’ve got a chance to put it right, We’ll need our top players to play well and I’m sure that’s what they’ll do.”

He added: “The fans will come out again in their thousands and that’s going to help us. We’ve seen how our fans can help put pressure on the opposition, which is what we’ll be looking to do against Legia Warsaw.”

Celtic can be backed at 9.50 to secure the 3-0 win which would enable them to qualify courtesy of the away goals rule.