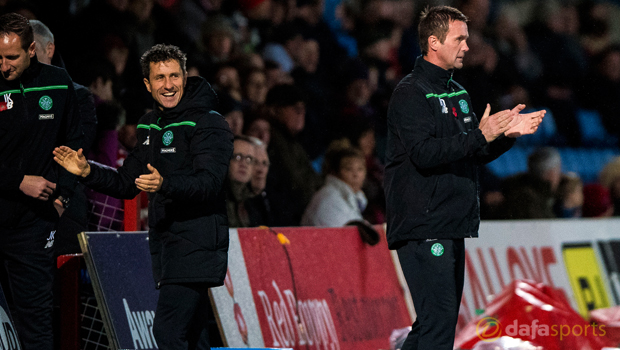 Celtic boss Ronny Deila should stand by his tactics in Europe, according to assistant manager John Collins.

The Scottish champions are bottom of Europa League Group A after back-to-back defeats to Norwegian side Molde and will probably have to win both of their remaining games, against Ajax and Fenerbahce, to qualify for the knockout stages.

Celtic are the runaway leaders in the Scottish Premiership, with a six-point advantage over nearest rivals Aberdeen after 14 games, but Deila is under pressure to deliver on the European stage.

Collins is adamant they don’t need to alter their approach to Europa League games and feels they were unlucky not to come away from their double-header against Molde without a share of the spoils.

“What would you expect him to change? Of course we want to tighten up,” he is quoted as saying by the Daily Record when asked if Deila should think about making changes.

“Against Molde we were the better team in the two games. We created more chances and had more possession but they were more clinical.

“They defended, sat behind the ball and weren’t bothered about any kind of possession, even at home. We couldn’t play like that at home against Molde. The way they play, sitting back, they get away with it. But we don’t want to play like that.

“I’m not going to say I’d rather lose but it is not something that excites me, playing football without the ball.”

Celtic are 251.00 to win the Europa League this season, with German giants Borussia Dortmund available at 6.00.

The long-term aim at Parkhead is to secure a return to the Champions League and Collins is convinced Deila is the right man to guide Celtic back into Europe’s top competition.

He added: “The coaching team watches reruns of games and goals conceded, constantly trying to get better, but we have the way we want to play.

“Of course our approach can get us into the Champions League – definitely. But we have to get better at what we do.

“When you come to setbacks and obstacles you have to believe in what you’re doing, as long as everyone sticks together we think we’ll get where we want to go.”