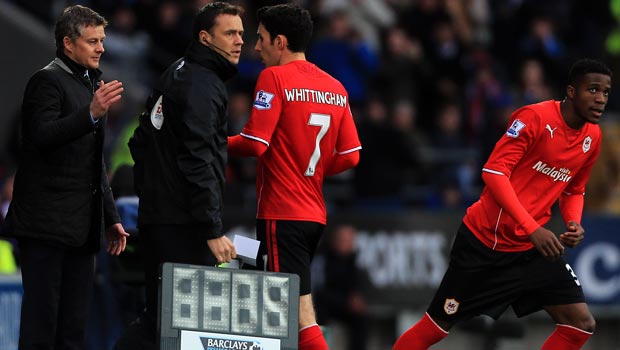 Cardiff City manager Ole Gunnar Solskjaer claims loan man Wilfried Zaha has “a big role to play” in the side’s Premier League survival bid despite him staying on the bench during Saturday’s vital win against Fulham.

The Norwegian tactician swooped on his former club Manchester United during the January transfer window to take the England winger to the Cardiff City Stadium for the rest of the season.

And while Zaha enjoyed a bright start to life with the Bluebirds, Solskjaer has opted to leave him kicking his heels on the substitutes’ bench for the past two games.

Following Zaha’s no-show in Saturday’s 3-1 win against relegation rivals Fulham, which has left City level on points with West Brom in the final position of safety, Solskjaer has been asked if he fits into his plans for the safety push.

However, the 41-year-old is adamant that the former Crystal Palace man remains an integral part of the team but Fraizer Campbell’s impressive display against the Cottagers meant he aborted his initial plan to replace him with Zaha after an hour.

“The original plan was to play Wilf on Saturday, but I decided instead to go with Fraizer Campbell who I thought might only last 60 minutes, but instead gave us everything he had,” he said.

“Of course Zaha has a big role to play, or I would not have brought him to the club.”

Meanwhile, Solskjaer is working hard on the training pitch with his out-of-form strikers who have not found the net since Kenwyne Jones’s winner against Norwich on February 1.

He added: “I understand what kind of situations will benefit them, and that is what we are doing. They will practise what they do in a game.

“At times we take them to work separately – you nurture them and give them some TLC because as a striker you want that.

“It can be tough when you are not scoring, but then one day you will score off your backside and you think you are the best in the world again.

“That is the confidence you need as a striker. It is a fine line between missing and scoring. Most of the goals will be scored from one touch.”