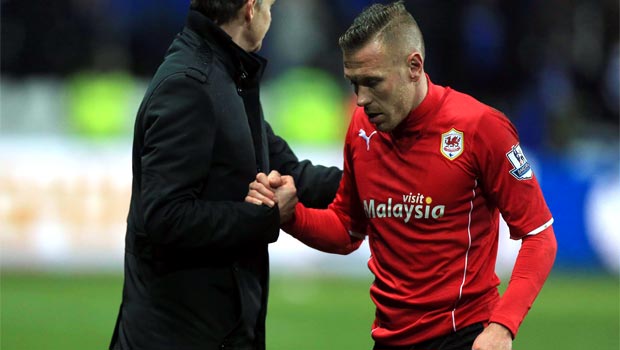 Cardiff City forward Craig Bellamy is looking forward to the relegation scrap and insists he is optimistic about their survival chances.

The Bluebirds have picked up just three points out of a possible 33 in their last 11 games, and as a result they have slipped to 19th in the Premier League table.

Cardiff have struggled since Malky Mackay’s departure, with new boss Ole Gunnar Solskjaer facing a difficult task to keep them in the top flight.

Their situation does not get any easier with Tottenham next up on Sunday, but they will have the bonus of welcoming Bellamy back into the first-team squad.

The Welshman returns after a three-match ban and is in a positive mood about their survival chances in what could be his final season in the game.

He told the Daily Star: “Who knows where my career goes at the end of the season?

“However, if it is to finish, what a nice way to go out by keeping this club in the Premier League.

“It would just be a great achievement, like promotion was last year. I would love to leave the club in a healthy state. It might not match the achievement of going up last season, but it wouldn’t be far off.

“I’m looking forward to the relegation battle and I think we can stay up. I feel sharp and quick and I believe I’ve got a very good chance of deciding games now.

“This is where players need to step up.”

The Bluebirds are favourites to go down at odds of 1.28 and can be backed at 2.50 to finish bottom at the end of the season in May.