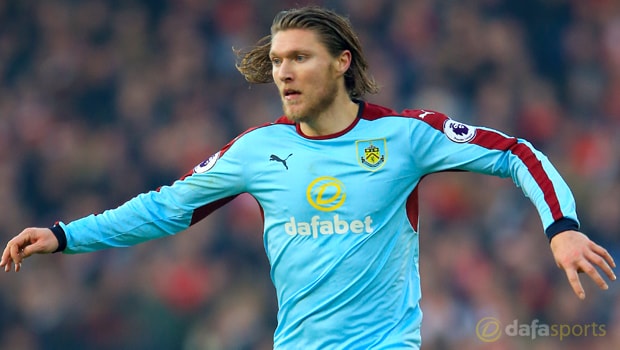 Burnley midfielder Jeff Hendrick believes he can continue to become a better player at the club after a recent surge in his confidence levels.

The Republic of Ireland international was one of Sean Dyche’s top summer targets and he agreed a £10million move from Championship side Derby following a good European Championships.

The midfielder has featured 18 times for the Lancashire outfit, scoring twice, to help them to enjoy a strong first half of the 2016-17 campaign.

Burnley currently sit 13th in the Premier League and Hendrick is feels he can continue to help them steer clear of being dragged down into a relegation battle.

The 24-year-old insists he is enjoying his time at Turf Moor and hopeful that he his newfound confidence will allow him to become a better player.

Hendrick said: “I’ve really enjoyed it, The lads have been brilliant, we’ve picked up a good few points and the performances have been getting better, away from home as well.

“I’m enjoying my football and hopefully I can continue to do that. “It’s a nice challenge. Over the last month or so I’m getting more confident, and I think that’s shown in my performances.

“It’s a weird thing, confidence, I thought I had it, and I did, but I can feel it growing in me more and more – it’s a brilliant thing to have. Hopefully I can hold onto it.”

Burnley will be looking to extend their strong run at home on Saturday and can be backed at 2.80 to win against defending champions Leicester, who are priced at 2.50 to take all three points, while the draw is available at 3.10.