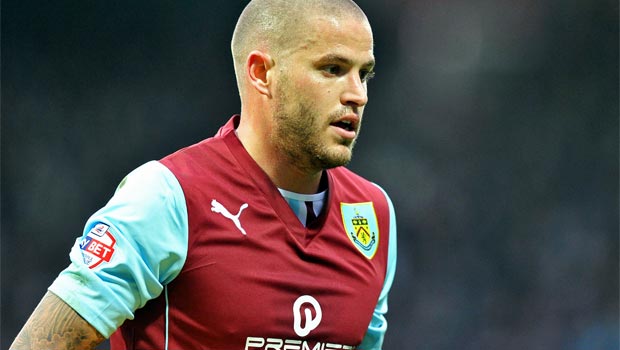 Burnley winger Michael Kightly admits there is mounting pressure at the top of the Championship table but has backed his team-mates to cope.

The Clarets moved back to the summit on Saturday with a 1-0 victory over Barnsley that ended a run of five games without a win.

It is tight at the top, with Queens Park Rangers only second to the Lancashire club on goal difference, while Leicester City are just a point behind in third.

It looks set to be a thrilling battle for promotion all season, with Derby County also in the mix after five straight wins and looking good under new boss Steve McClaren.

Next up for Sean Dyche’s side is a trip to take on Leicester, which could see the Foxes leapfrog the Turf Moor club into first place if they claim the spoils and QPR fail to beat Blackpool.

And while Kightly acknowledges the fact that they are now the team to beat, he feels the experience in the dressing room and among the backroom staff has made it easier to deal with.

“Being at the top of the league, there is that pressure of winning every game. Everyone expects you to win,” he told BBC Radio Lancashire.

“The staff have been a different class and it’s something that the players are coming to terms with.”

Leicester did the double over Burnley last season but Kightly, who is on loan from Stoke City, does not feel it is a must-win game with so much of the season still to go.

“Let’s not worry about thinking that we’ve got to win this game because there are loads of games after that one,” he added.