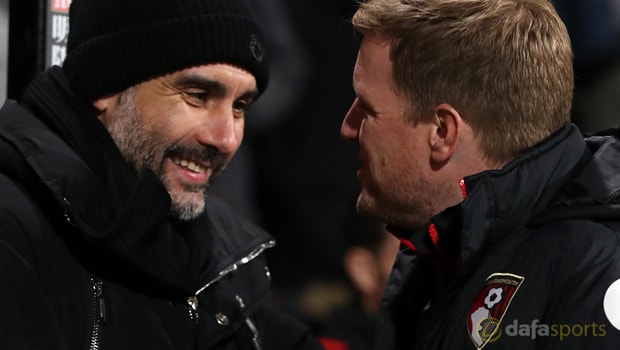 Bournemouth manager Eddie Howe has claimed the injuries his side picked up on Monday cost them after they lost 2-0 to Manchester City.

Howe had originally been handed a boost, with defenders Simon Francis, Adam Smith and Charlie Daniels all passing fitness tests to play.

However, captain Francis was forced off due to a hamstring injury after just 23 minutes while Daniels struggled with his fitness.

Midfielder Jack Wilshere also limped off just before half-time with an ankle problem and Howe admits his team never recovered.

He told Monday Night Football: “We gave our best. I thought Manchester City were very good. They kept the ball very well and we found it difficult to build any momentum and pressure.

“In terms of effort and commitment, our lads gave everything and obviously we were hampered by the injuries we received in the first half.

“Losing both players in one half of football is a big blow. When you lose your captain – and he’s been really important to us for a number of years – it’s a big moment in the game.”

The Cherries, 8.00 to be relegated, remain 14th in the Premier League and six points clear of the bottom three.

Howe’s men are out of the FA Cup and now have a weekend off before they play West Brom on February 25.

Howe added: “We have to be positive. We go into a little break in the Premier League calendar and we have to come back a refreshed team, ready to fight for our Premier League survival.

“We have no doubts that’s the situation we’re in and we can grow from this experience and come out a better team.”