Billy Jones: Stadium of Light can be a fortress 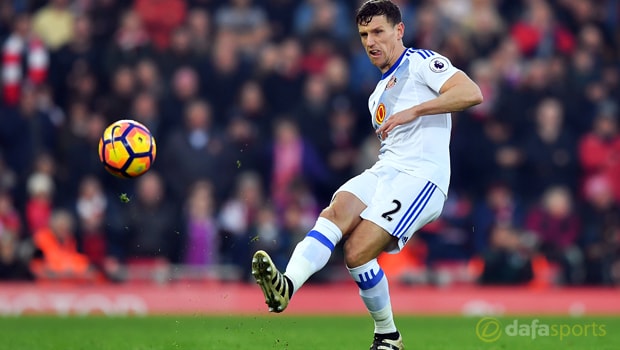 Sunderland defender Billy Jones wants to make the Stadium of Light a fortress following their first home win of the season against Hull earlier this month.

The Black Cats ran out comfortable 3-0 victors against their relegation rivals on November 19, as they recorded their first Premier League success on home soil since beating Everton in May.

Prior to the victory over Hull, Sunderland had picked up just one point at the Stadium of Light this season, but full-back Jones believes his side can build on their maiden victory and make the ground a tough place to visit during the rest of the campaign.

“We want to make the Stadium of Light a fortress so now we’ve got that first home win we want to build on it,” he said.

The 29-year-old reserved particular praise for the club’s supporters, who he believes were influential during their triumph over Hull, and he now wants teams to fear coming to the Stadium of Light.

“During the game against Hull the fans were amazing, as they always are, so we know we’ll have that backing this weekend and we just want to give them results,” he added.

“We want to make the Stadium of Light a hard place for teams to come, and for them to know that when they come to Sunderland it’s going to be a tough game, that they aren’t going to get much from.”

Sunderland are next in action when they play host to reigning Premier League champions Leicester on Saturday, and a victory would move them to within two points of the Foxes in the standings.