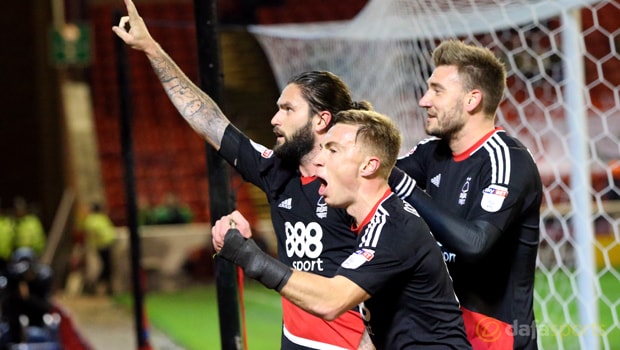 The Magpies were expected to win at the City Ground but they fell to their third successive defeat on a night to forget in Nottingham.

Benitez’s men went into the game on the back of two defeats – to Blackburn Rovers in the league and Hull City in the EFL Cup – and they returned home empty handed after seeing two players sent off.

Lansbury was involved in clashes with both Jonjo Shelvey and defender Paul Dummett, resulting in red cards for the Newcastle pair.

Matt Ritchie opened the scoring for Newcastle despite being a man down, while Forest missed two penalties through Nicklas Bendtner and Lansbury – the second spot-kick resulting in Dummett’s dismissal in first-half stoppage time.

Bendtner made amends for his miss with the equaliser seven minutes after the restart before Newcastle centre-back Jamaal Lascelles put through his own net late on as Forest snatched the points.

Newcastle boss Benitez couldn’t hide his frustration after the match, aiming all his anger at Lansbury. “Everything was against us,” Benitez told Sky Sports.

“You could see in the game we have a lot of things we can complain about. But I was really surprised with Lansbury. The way he was acting, twice with the penalties and also with Jonjo Shelvey, but maybe he’s proud of himself.

“If the referee cannot see that Lansbury was kicking Jonjo before, I will not defend Jonjo as he made a mistake, but [Lansbury] was kicking him before from behind.

Sometimes the FA take action also on the players that are over-reacting, so [maybe that will happen here].

“[With Dummett’s sending off] it was very clear the No 10 (Lansbury) was waiting for him. So maybe again the FA can analyse this and see the behaviour of the No 10.”