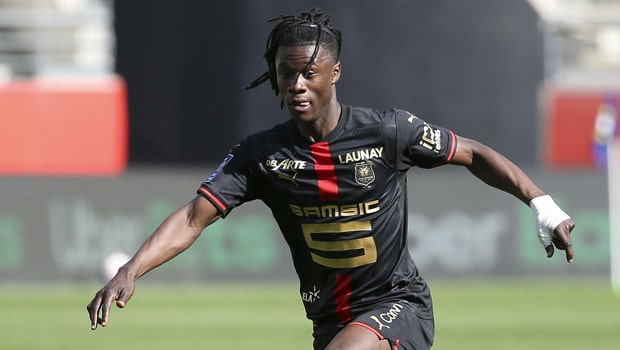 Real Madrid have been heavily linked with a move for the French youngster after he caught the eyes of may top European clubs last season. Eduardo Camavinga has been in terrific form for Rennes and has played solidly despite his age. This attracted interest from a host of clubs in Europe, especially Real Madrid.

Los Blancos made some moves to obtain his signature, but they were not able to sign him. Rennes were determined to hold onto their prized teenager, so they frustrated Real Madrid’s efforts to sign him at the start of the 2020/21 season. Nonetheless, Zinedine Zidane is expected to reignite his interest in signing him during the upcoming summer transfer window.

Although, Camavinga’s current contract ends in 12 months, and with no plans to sign an extension, Rennes will likely ask for a minimum of €55m for him compared to their former asking price of €70m back in 2020.

Although most media outlets have strongly linked Camavinga with a move to Real Madrid, Bayern Munich could be set to sign the talented midfielder. According to new reports from Diario AS, Bayern have now indicated their intent to bring Camavinga to the Allianz Arena. This is because the Bavarians are looking for an alternative to Borussia Monchengladbach’s Florian Neuhaus.

The 24-year-old midfielder, Florian Neuhaus has been targeted by Bayern Munich as a potential transfer for next summer, but Bundesliga giants also have Camavinga in mind as an alternative.

Bayern Munich are set for many departures next season, with David Alaba set to join Real Madrid on a free transfer in the coming months. Bayern will be without their title-winning manager Hansi Flick.

Bayern Munich will face Bayer Leverkusen today as they look to maintain their stronghold at the top of the Bundesliga table.