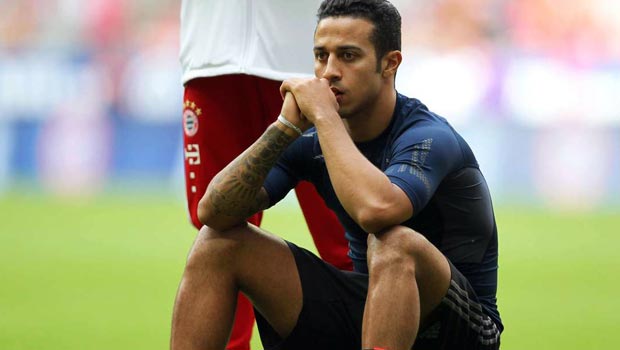 Bayern Munich have concerns over the long-term fitness of Spanish playmaker Thiago Alcantara, who has been sidelined by a knee injury since March.

Bayern sporting director Matthias Sammer has admitted the former Barcelona midfielder is still struggling with the problem and the club cannot put a date on when he may be ready to return.

Thiago had been expected to make the start of the current campaign but he is yet to feature for Bayern in 2014-15.

The Spain international missed the World Cup after rupturing a knee ligament in May as he was building up his fitness following a previous and unrelated knee problem picked up in March.

Sammer has now revealed the 23-year-old is still unable to shake off the problem amid reports that the original operation he underwent was in some way botched.

He told Kicker: “We cannot really say how long his recovery will take. It’s impossible to set a date for a comeback. This is a very regrettable development.”

Last month, the Bayern Munich midfielder publicly denied reports that he had suffered a setback in his recovery from the injury.

Reports in the German media suggested that he will not return until at least October, but Thiago insisted that his rehabilitation was going as planned.

“There is no setback!” the former Barcelona man wrote on Twitter in response to the rumours in the German press.

“I’ll continue to work hard every day to get my knee back to being strong, and it will take as long as I expected it to.”

Bayern drew 1-1 with Schalke last weekend to sit two points behind leaders Bayer Leverkusen after only two matches of their Bundesliga title defence.

Pep Guardiola’s side next face VfB Stuttgart at the Allianz Arena after the international break and are the 1.15 favourites to pick up all three points.

Stuttgart are 6.80 to claim a draw and 11.00 to record a shock win over the champions – an unlikely scenario given that they have lost their last 11 league and cup contests against the Bavarians.