Barcelona’s Luis Enrique: ‘We deserve to be top’ 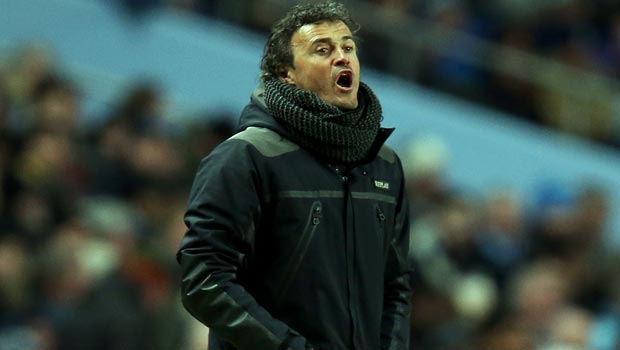 Luis Enrique said Barcelona deserved their place at the top of La Liga after watching his side thrash Rayo Vallecano 6-1 to replace Real Madrid as league leaders.

Carlo Ancelotti’s Real were beaten by Athletic Bilbao on Saturday, handing Barcelona the chance to move top on Sunday morning.

Lionel Messi helped himself to a 24th hat-trick of his La Liga career alongside a strike from Gerard Pique, with a Luis Suarez brace bookending the scoring.

The Barcelona manager says there will be more shocks to come before the end of the season but he feels his team deserve to be league leaders.

“The objective is to be top when the season ends,” he said. “I always said the big teams would suffer defeats, and it will keep happening.

So we must remain on guard. We have earned the situation we are in now.”

Suarez is really starting to hit the high notes for Barcelona following a settling in period and Enrique paid tribute to the blossoming relationship between the Uruguayan and Messi.

“Luis and Messi understand each other well – better all the time,” he said. “They have good chemistry and them linking up is good for the team.”

Having qualified for the Copa del Rey Final last week and now taken over at the top of La Liga, Barcelona’s season is beginning to come together nicely.

They will also welcome Manchester City to the Nou Camp with a 2-1 advantage in their Champions League last-16 second leg.

With his team 1.12 to win the Copa del Rey and 4.30 for Champions League glory, the Barcelona manager says they cannot afford to take their eye off the ball.

“To be in the Copa final we have overcome difficult opponents,” he said added “We must be prudent in every way in La Liga and in the Champions League.”