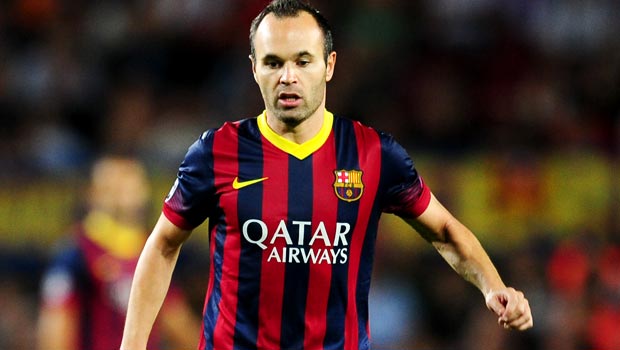 Andres Iniesta has warned Atletico Madrid that Barcelona will be giving “200 per cent” in Saturday’s La Liga season finale to ensure they snatch the title away from them.

Atletico go into the game at the Camp Nou knowing a draw will be enough for them to secure their first domestic title since 1996.

However, Barca sit three points behind and know a win will see Gerardo Martino’s men retain their title and put a silver lining on an otherwise disappointing campaign.

The Catalan giants looked out of the running a few weeks ago, but Real Madrid’s Champions League exploits appeared to catch up with them as Sunday’s 2-0 defeat at Celta Vigo ended the hopes of Carlo Ancelotti’s side.

Barca have been held to successive draws by Getafe and Elche respectively, but Atletico have failed to capitalise and seal the title having followed up a defeat to Levante with a 1-1 home draw against Malaga on Sunday.

Diego Simeone’s side remain in the driving seat as they only need a point, while it is a must-win game for Barca. But Iniesta has vowed that they, like the fans, will give everything to win it.

He said: “They’ll be giving 200 per cent just like the players. Let’s hope we can all celebrate a win together.

“We have a one-off chance to win the league at home and in front of our supporters.”

The playmaker added: “Whoever wins will deserve it – why won’t we deserve it if we win? We’ve led the table, lost big games, won big games.

“The league is about a whole season of effort, but right now, we will be putting a whole year’s work on a 90-minute game.

“Winning the league can’t cover up a poor season and if we do win it that shouldn’t change anything about the future of the team.

“Winning the league would be a great way to sign off and to thank Martino after all he has had to go through.”