La Liga: Barca bid to make it a perfect eight 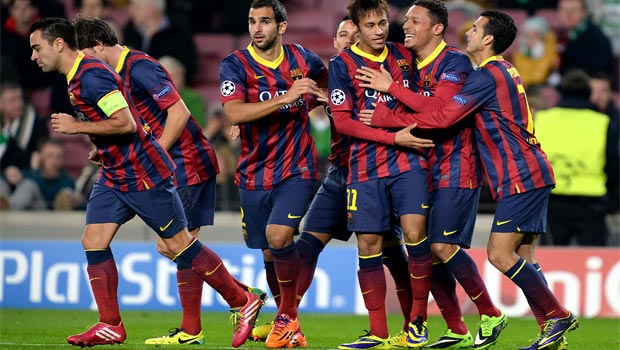 The Spanish champions are joint top of the table on 30 points with Atletico Madrid ahead of the game at the Nou Camp, but will have to be wary of the visitors who have already shown they have improved again since being promoted back to the top flight.

The Yellow Submarine occupy fifth spot in the table on 28 points and have earned draws with both Madrid sides already this season.

They will take heart from the fact that Barcelona were beaten for the first time this campaign at Athletic Bilbao a fortnight ago, and with Lionel Messi absent they do look vulnerable when stifled.

However, Gerardo Martino’s side can still boast a 100 per cent home record, and despite no Messi they will be confident of keeping the home run going.

Goalkeeper Victor Valdes is still ruled out while full-back Dani Alves is battling to overcome a calf problem so may not figure.

Neymar was in top goalscoring form in the midweek 6-1 demolition of Scottish champions Celtic in the Champions League, and he will be expected to get on the scoresheet again.

Villarreal will be without two of their main players, with Cani injured and Bruno Soriano suspended, but ex-Barca man Giovani dos Santos will be pumped up to lead the forward line.

Coach Marcelino Garcia will set up a defensive formation while attempting to hit the home side on the break, so a fascinating confrontation is on the cards.