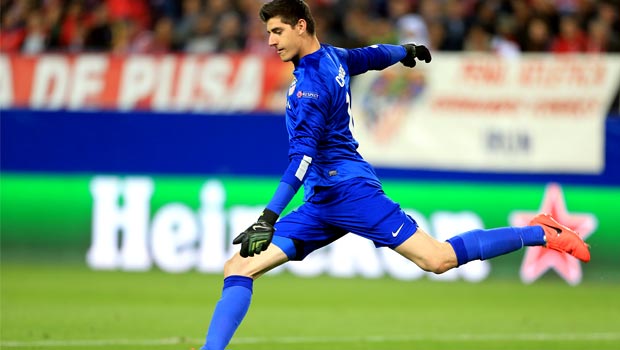 Atletico, who are 4.75 to win the Champions League, were held to a goalless draw by Chelsea in the first leg of their semi-final at the Vicente Calderon on Tuesday night.

Diego Simeone’s side were made to work hard by a rugged Blues outfit who travelled to Spain with one ambition – to keep the game tight and prevent the opposition from scoring.

Courtois started the game against his parent club and had very little to do over the course of 90 minutes but he insists the season has taken its toll on the squad and admits it is nice to have the opportunity to rest up ahead of a key fixture at the Mestalla.

Los Rojiblancos head into the game leading in La Liga, boasting a four-point gap over second-placed Barcelona and seven points better off than city rivals Real Madrid who have a game in hand.

Sunday’s opponents Valencia were also in European action in midweek, losing 2-0 to Sevilla in the semi-finals of the Europa League on Thursday, and Courtois believes the quick turnaround could play into their hands.

Courtois said: “The good thing has been the two more rest days because Valencia played on Thursday [Europa League].”

The future of the Belgium international still remains unclear as Chelsea are keen to take him back at the end of the season but he insists he will not sit on the bench as back-up for Petr Cech.

The 21-year-old has been one of the most consistent performers in La Liga this year and is on course to be crowned the Zamora trophy winner which is handed to the best goalkeeper.

He added: “It is like last year, it is something nice to win but I think the trophy is for the whole team.

“It is the work of the whole team and they do their job well. The Zamora is very nice for the team and I hope to win it at the end of the season.”

Atletico are 1.75 to win La Liga and end the dominance of Real and Barca that stretches back almost a decade.