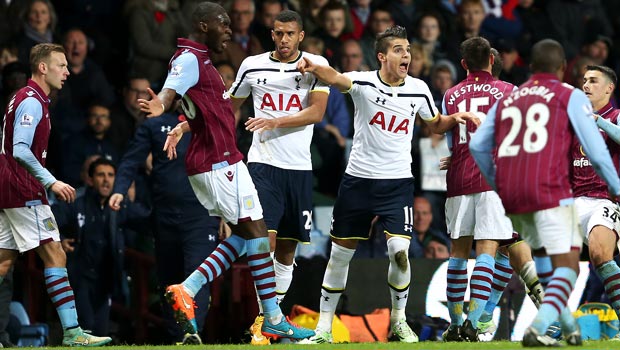 Aston Villa manager Paul Lambert admitted that Christian Benteke’s actions on Sunday cannot be condoned but insisted that his striker was provoked by Tottenham.

Benteke was shown a straight red card by referee Neil Swarbrick in the Premier League loss to Spurs, who are priced at 7.00 to win the Capital One Cup, after he raised his hand to the face of Ryan Mason.

The sending off, which came with 65 minutes on the clock, appeared to change the face of the game as Villa led through an Andreas Weimann strike. Goals from Nacer Chadli and substitute Harry Kane handed the north London club a much-needed league win after a shaky start to the season.

Lambert believes that Mason, who was one of a number of players involved in the incident, antagonised Benteke by putting his head into the Belgian’s face.

He said: “I can’t condone what Christian did, lifting his hand, but he was provoked.

“If you go back a frame you see the lad putting his head in Christian’s face. If you do that you understated why Christian did it, you don’t get away with it, but my daughter can thrown a harder forearm than that.

“I understand the emotion and adrenaline rush; if someone puts their head in your face your natural reaction is to push them away.”

The 23-year-old has only recently returned to the fold after spending a long period out with an Achilles injury but will now be forced to sit out the next three games.

Lambert’s side sit 15th in the table and have some tough-looking fixtures on the horizon against West Ham, Southampton and Burnley.

Lambert added: “It’s a setback for him and for us, he’s going to be missing the next few games.”