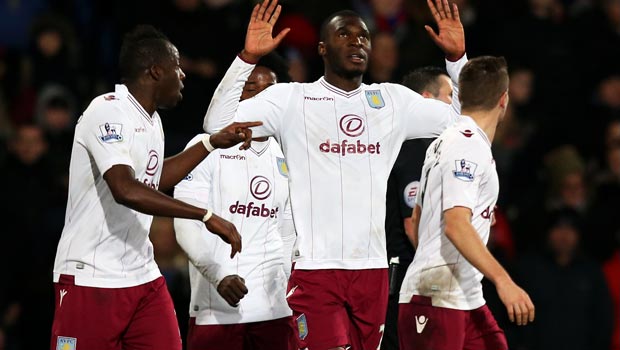 Aston Villa star Gabby Agbonlahor is confident his side can climb the Premier League table following the return of Christian Benteke from injury.

Benteke missed the start of the season with a serious Achilles injury, which also saw him miss the World Cup with Belgium this summer.

The striker then picked up a suspension but he has now returned to full fitness and has been in fine form in recent weeks.

The 24-year-old scored Villa’s winner against Palace last week and impressed during Leicester’s visit on Sunday, as he set up Alan Hutton’s winning goal despite failing to find the target himself.

Agonlahor is convinced Villa’s results will improve following Benteke’s return and expects his fellow forward to impress in the coming weeks.

He told the club’s official website: “It’s great to see Christian back after his injury and then his suspension.
“He’s a big, big player for us.

“He offers a lot more than just scoring goals – look at his assist to Alan Hutton on Sunday.

“That shows that if he doesn’t score he adds something. He contributes a lot of assists.

“And to be fair to him, he could have had a hat-trick on another day. He just came up against a goalkeeper (Leicester’s Kasper Schmeichel) in really good form.

“We are very, very happy to have him back. And he has his sharpness back too. It’s just great news for the club, no question.”

Villa are now 11th in the table ahead of Saturday’s trip to West Brom after two successive victories, following a run of nine games without a win.

Benteke and co can be backed at 3.69 to win at the Hawthorns on Saturday and Agbonlahor is keen for his side’s run to continue.

He added: “The table looks okay now. We’re not getting carried away though. We will keep working hard. We will continue to try and pick up points.”