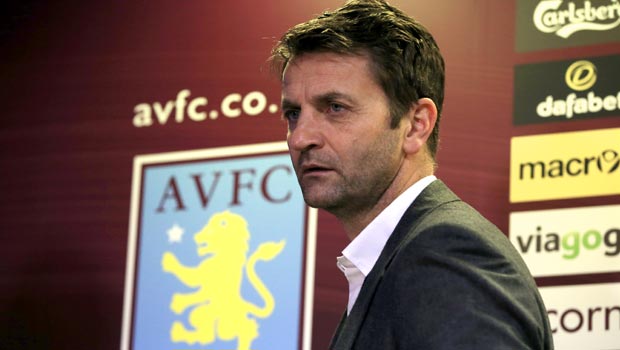 New boss Tim Sherwood feels Aston Villa have been too “tentative” this season and he now wants the players to “go fighting and start throwing a few punches” in an attacking sense.

The 46-year-old former Tottenham manager was drafted in as the new boss over the weekend on a deal until summer 2018 and his immediate remit is to ensure the side avoid relegation from the Premier League this season.

The situation does not look good as Villa have not won in 10 league games and have only scored a dismal 12 goals in 25 games so far.

Last Tuesday’s 2-0 defeat at fellow strugglers Hull City left Villa in the final relegation spot and resulted in the dismissal of Lambert after just over two-and-a-half years at the helm.

Sherwood’s arrival had a quick impact on the players as they defeated Premier League rivals Leicester 2-1 at Villa Park to reach the quarter-finals of the FA Cup on Sunday.

And ahead of his first official game in charge in the league against Stoke City at home on Saturday, Sherwood revealed his plan to get the players to be more attack-minded and to display some aggression.

He said: “I was only looking from the outside but they have looked a little bit tentative. I think they need to play on the front foot a little bit more.

“But let’s have a go fighting and start throwing a few punches ourselves. When I came here (Villa Park) as a player, it was a difficult place to come and get results.

“I want to turn this place back into a fortress again, especially between now and the end of the season. It is very, very important that this club stays in the Premier League.”