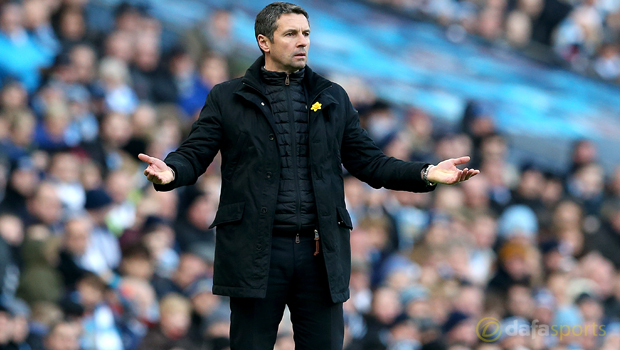 Aston Villa boss Remi Garde insists the club must maintain the belief that they can survive in the Premier League this season.

Villa are currently rooted to the bottom of the table, nine points adrift of safety, and they head into Saturday’s clash with Swansea at the Liberty Stadium on the back of five straight defeats.

Despite their perilous position, Garde remains hopeful that his side can avoid relegation from the top flight and he is anticipating a tough match against the Swans, who themselves are not completely assured of safety.

He said: “I am not stupid. It’s an impossible mission that we have to make possible. You never know in football.

“We need to win games – at home or away, it doesn’t matter. We are in an urgent situation. It’s always difficult to know what will happen in the game. It will be very tight, probably with a lot of tension. They [Swansea] also need points.”

The Frenchman insists every player within the squad must retain the belief that the club can avoid relegation, with just eight matches of the campaign still to play.

He added: “Of course we do have the obligation to believe but it’s not just an obligation it is something that should be inside every player, inside myself too.”

Villa have lost their last four encounters with the Swans, including a 2-1 defeat at Villa Park earlier in the season, with their last success over the Welsh club coming in September 2012 when they secured a 2-0 victory on home soil.

The Villans are available at 6.00 to record only their fourth league win of the campaign on Saturday, whilst Francesco Guidolin’s side are on offer at 1.67 and the draw is priced at 3.75.