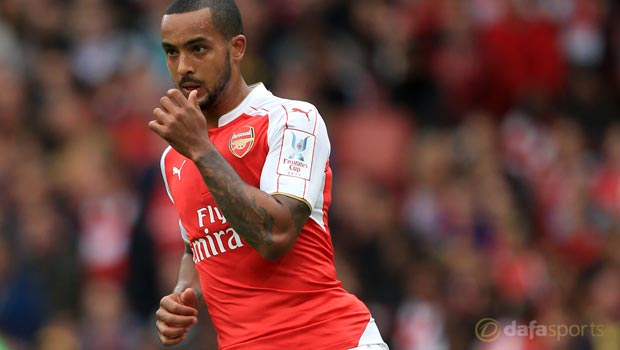 Arsene Wenger has revealed his admiration for the manner in which Theo Walcott has developed during Arsenal career.

Wenger brought Walcott to north London as a raw teenager, paying Southampton £12million for his services.

The Frenchman says Walcott has gone from a boy to model professional, admitting the setbacks he has endured along the way have helped to shape his character.

“He has become very mature, he has gone through difficult periods so he is a very strong man,” Wenger told Arsenal Player.
“He is a man today, when he arrived here he was a boy, a little boy who discovered a world where he did not know anything about it.”

Walcott is likely to be frustrated with his lack of game time so far this season. He was given just a 33-minute cameo in the home defeat to West Ham while he remained on the bench throughout last Sunday’s victory away at Crystal Palace.

The England international had finished last season on a high, returning from injury to play a central role in Wenger’s team, earning a starting place in the FA Cup final as a result.

Wenger has paid tribute to Walcott’s commitment to the Arsenal cause, despite some lengthy injury setbacks.

“Of course he had to go through bad injuries and disappointments and I believe he is a man today, a man who knows what he wants and has been faithful to our club. It was a great signing,” he added.

Walcott will hope to be involved when Liverpool visit the Emirates on Monday, a game in which he is 2.25 to score at any time.

Arsenal are 1.73 to get their first Emirates win of the season against Brendan Rodgers’ Reds who are 5.00, with the draw at 3.80.