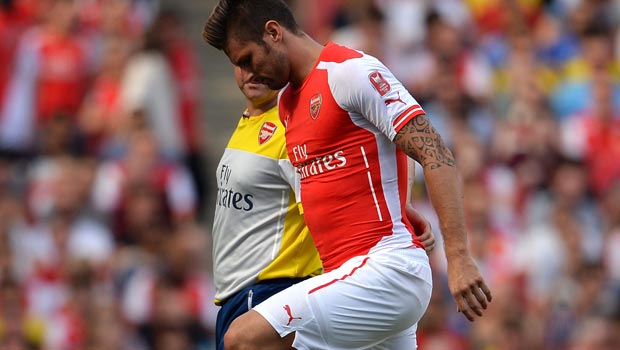 Arsenal boss Arsene Wenger has confirmed striker Olivier Giroud is unlikely to play again this year after undergoing surgery on his ankle.

The France international picked up the injury in the final few moments of his side’s 2-2 draw with Everton on Saturday.

Minutes before the incident, Giroud had scored the equalising goal to give Arsene Wenger’s side a crucial point.

Confirming the injury, Wenger told Sky Sports: “The news is that he had surgery today and the surgery went well but he will be out – maybe to be competitive at the top, top level – until the end of December, beginning of January.”

On Wednesday night, Wenger used new signing Alexis Sanchez as a striker and the former Barcelona man netted the only goal of the game as the Gunners qualified for the UEFA Champions League group stages.

Wenger has other strikers at his disposal with Yaya Sanogo, Joel Campbell and Lukas Podolski all possible replacements for Giroud.

Theo Walcott is on his way back from a long-term injury and Wenger is confident he doesn’t need to buy a replacement before the end of the transfer window.

“We will try to look around but we want quality and we have quality,”
he said. “I bought Sanchez to be a striker and I think Walcott can be a good striker as well.

“Sanogo can be a good striker, Podolski can play there and Campbell if you ask what he is, he’s a striker. They are players of quality and we will see.

“We will concede in England that every time you have a problem you can’t just buy. After the first of September you still have to live with it.”

Wenger’s side have showed plenty of potential in their first two Premier League games and they are currently 8.00 with Dafabet to win the Premier League title.