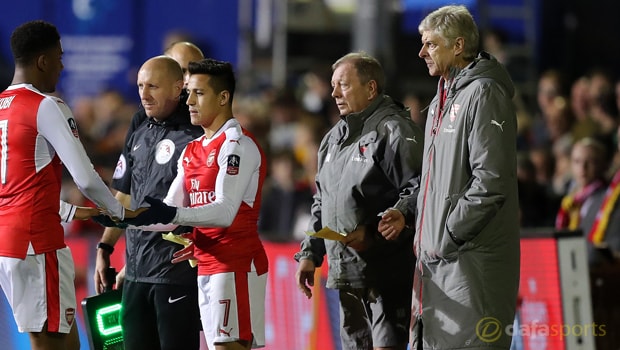 Arsenal coach Arsene Wenger admits he made the wrong decision to drop Alexis Sanchez following his side’s 3-1 defeat to Liverpool on Saturday.

The Chile international was expected to start the clash as he went into the game as the club’s top scorer.

However, he was sensationally left out of the starting XI, despite already scoring 20 goals for the club this season.

Sanchez was thrown on at half-time, but Arsenal were already trailing 2-0 after goals from Roberto Firmino and Sadio Mane.

The former Barcelona star did play his part in Arsenal’s goal as he teed up Danny Welbeck but it was a night to forget for the Gunners.

Georginio Wijnaldum secured the result for Liverpool in added time with a well-placed finish and Wenger was quick to admit his error.

He told Sky Sports: “Yes (it did backfire) but I felt that in the first half the strikers suffered because we didn’t dominate in the midfield and in the second half you could see that it was easier because Danny Welbeck and Olivier Giroud were much better, so it’s always debatable.

“The thinking was that we had to go more direct and I wanted to play two players who were strong in the air and after that to bring on Alexis Sanchez in the second half.

“We did go direct in the first half. We didn’t create any chances and we didn’t make enough of our corners.

I am strong enough and lucid enough to analyse. I don’t deny Alexis Sanchez is a great player – I bought him – but this was my plan.”

Sanchez will be hoping to start the club’s next match on Tuesday night as they host Bayern Munich in the Champions League.