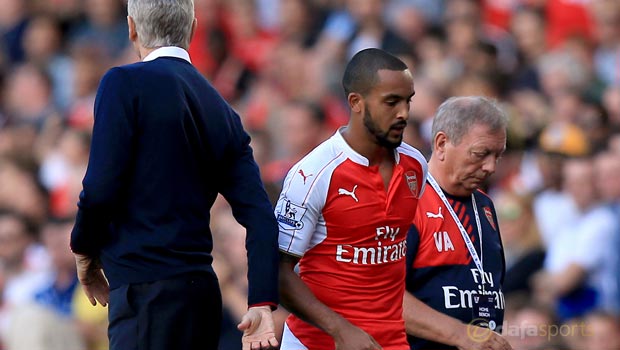 Arsenal boss Arsene Wenger remains convinced Theo Walcott can become a world-class striker despite him lacking a cutting edge at this time.

The 26-year-old, who signed a new long-term contract with the club last summer, has impressed since returning from a serious knee injury midway through last season.

The England forward made it 11 goals in his last 11 starts in the Premier League at the weekend when he netted the first goal in the north Londoners’ 2-0 victory over Stoke.

Despite his impressive strike-rate, Walcott could have had more than one against the Potters, missing two good opportunities to break the deadlock before finally scoring for the first time this season.

The former Southampton youngster’s failure to take the chances presented to him saw Wenger questioned once again about whether he should have signed another striker during the summer transfer window.

However, the Frenchman was determined to stick to his guns and is steadfast in his belief that Walcott can develop into a quality striker.

“I think he has an eye for the goal,” Wenger said. “The quality of his receptions in the box is at the top. He will become an instinctive finisher when he has a couple of goals behind him.”

Walcott admitted after the game that he needs to work on his finishing, but is confident of being a regular scorer for Arsenal this season.

Walcott will battle it out with Olivier Giroud for the lone striker role again in midweek when the Gunners travel to Dinamo Zagreb in the Champions League.