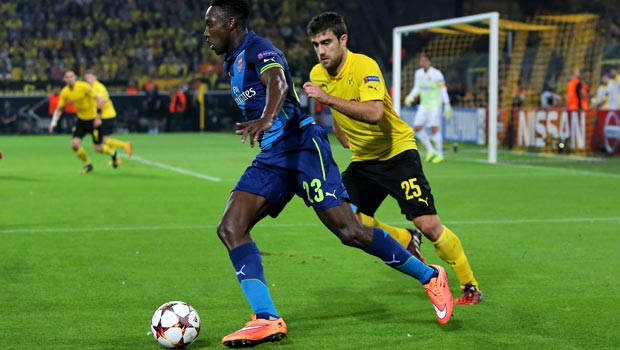 Arsenal boss Arsene Wenger has no concerns over Danny Welbeck’s form despite his failure to score at Borussia Dortmund on Tuesday.

The Gunners slumped to a 2-0 loss at the Westfalenstadion in their first Champions League Group D game, with Ciro Immobile and Pierre-Emerick Aubameyang on target for the hosts.

Welbeck, who also missed a great chance against Manchester City at the weekend, wasted a glorious one-on-one opportunity in Dortmund with the game goalless but Wenger is convinced the £16million summer signing from Manchester United will prove his worth.

“Danny will improve, I don’t think we have to make a problem of that,” Wenger said.

“He had a very lively first half. He had two or three good chances but couldn’t finish them. There was one obvious one. We have to be patient with him.

“The paradox of the night is that we had very good chances to score first, but they then scored from counter-attacks.”

Wenger also confirmed midfielder Jack Wilshere will have a scan on an ankle knock he picked up during the loss to BVB.

The England international has struggled with ankle injuries in the past but Wenger remains hopeful this latest setback is not too serious.

He added: “Wilshere has turned his ankle. It’s difficult to say how bad it is because I’m being cautious.

“Normally it’s not very bad but because of his history (with ankle injuries) I’m being cautious.”

Arsenal travel to Aston Villa in the Premier League on Saturday and they can be backed at 1.87 to secure the win.