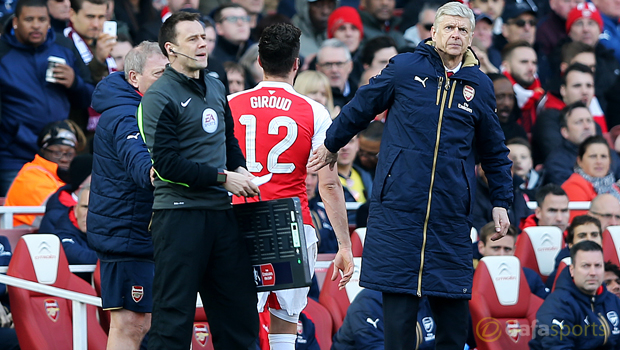 Arsene Wenger may have watched his side relinquish their grip on the FA Cup but the Frenchman is in no mood to give up his position at the Emirates Stadium.

Wenger says speculation surrounding his future as Arsenal manager has become ‘a farce’ and he insists that his squad has complete belief in what they are trying to do.

The Gunners boss wants his team to be judged at the end of the season.

Arsenal’s quest for a third straight FA Cup triumph was brought to an end by Watford on Sunday, the Hornets staging a smash and grab 2-1 victory at the Emirates.

Next up for Wenger and his side is Barcelona at the Nou Camp, Arsenal travelling to Spain with a 2-0 first-leg loss behind them in their Champions League last-16 tie.

By the time they arrive in the Catalan capital, they could be as many as 11 points behind Premier League leaders Leicester City, who host struggling Newcastle on Monday.

Wenger is defiant that Arsenal are on the right track.

“What is going on at the moment is very, very difficult to take for the players, but judge us at the end of the season,” he said.

The questions over his own future at the club will not divide the dressing room, says Wenger.

“It is becoming a farce. We have lost a game. Arsenal has lost games before in history and we will lose again in the future. We will stick together and cope with it and prepare for the next one with complete belief.”

Arsenal are available at 12.00 to defeat Barcelona in the Nou Camp on Wednesday. The La Liga leaders are 1.25 to win the match while the draw is 6.50.