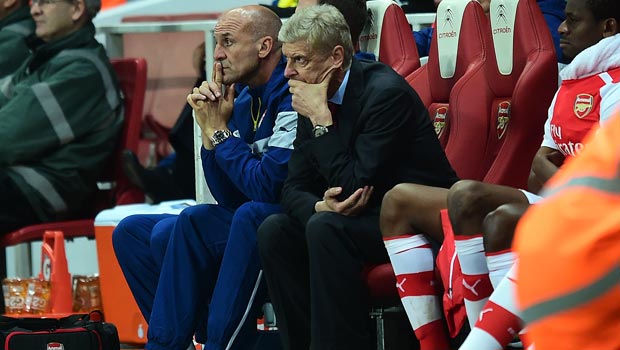 Arsenal boss Arsene Wenger admits he is growing concerned by the club’s growing injury list after Aaron Ramsey and Mikel Arteta picked up knocks in the 1-1 draw with Tottenham.

Both midfielders had to be brought off the field of play after picking up injuries in the north London derby.

Arteta, 32, picked up a calf problem, while Ramsey suffered a hamstring injury, with both going off in the first-half.

The duo are now set to miss the club’s next two games against Galatasaray on Wednesday and Chelsea on Sunday due to their injuries.

Ramsey’s injury particularly annoyed Wenger after he rested the Wales international for the Capital One Cup clash against Southampton in midweek.

Fellow midfielder Jack Wilshere also picked up an ankle knock and is a doubt ahead of the UEFA Champions League clash against Galatasaray.

Wenger is currently without long-term absentees Olivier Giroud, Mathieu Debuchy and Theo Walcott and he admits he is short on players at the moment.

“They’re out for Chelsea,” he said.

“It is a concern that Ramsey did his hamstring. I don’t understand because he had a good rest this week and I didn’t play him against Southampton on Tuesday.

“It’s a surprise because he’s usually a resistant boy.

“Suddenly we are short because we lost three players [against Tottenham], and let’s not forgot that we already have two out long-term plus Theo Walcott, that’s six.

“Abou Diaby is not ready, so it starts to become a worry.”