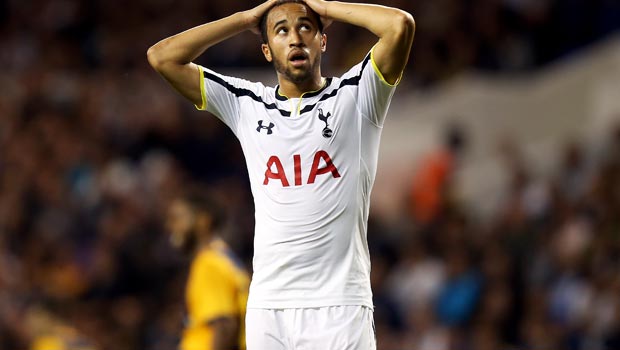 Tottenham have concerns over the fitness of Andros Townsend ahead of Sunday’s Premier League clash with West Bromwich Albion.

Townsend suffered a dead leg in Thursday night’s 0-0 draw with Partizan Belgrade in the Europa League and will have to be assessed ahead of the home clash with the Baggies.

Spurs have plenty of options should Townsend not make it, but boss Mauricio Pochettino would much prefer to have a full squad to select from.

Tottenham are hot 1.50 favourites to beat West Brom at White Hart Lane, while Albion are on offer at 6.78 to pull off an upset and the draw is 3.91.

Meanwhile, Pochettino declared himself happy with his side’s performance as they kicked off their Europa League Group G campaign with a goalless draw in Belgrade.

The Spurs boss made a host of changes for the game as Emmanuel Adebayor, Younes Kaboul, Mousa Dembele and Nacer Chadli, all remained in London, but should return to face West Brom.

The game was also played in a very hostile atmosphere and Pochettino was happy with a point and the performances of Benjamin Stambouli and Federico Fazio, who made their full debuts.

“I am happy with the performance [of Fazio],” Pochettino said. “It was his first game, like Stambouli.

“They played first time with us and it is always difficult to make your debut, but I am happy.

“I think the result was fair because I think that Partizan in the second half played well and we did well in the first half. In the end, it is a fair result.”