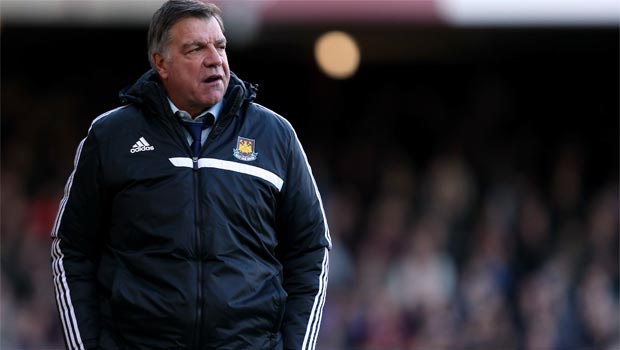 West Ham United boss Sam Allardyce says his side’s next two games against West Brom and Fulham will be vital in their bid to avoid relegation this season.

The Hammers threw away a 1-0 lead at home to Arsenal on Boxing Day – eventually losing 3-1 thanks to a brace by Theo Walcott and a Lukas Podolski goal.

They sit second bottom in the Premier League table after Crystal Palace, Fulham and Sunderland all won away from home on Thursday and the Hammers will be worried a relegation battle now looms in the second half of the campaign.

Allardyce does not seem too concerned, however, although he wants his side to pick up points in the upcoming games against their fellow strugglers.

West Ham host the Baggies on Saturday before going to Fulham on New Year’s Day and ‘Big Sam’ admits they are crucial matches.

“Our big games are the West Broms and Fulhams in the next two games,” he said. “It is about performing like that against those clubs, which give you a better chance to win the game.

“We have to believe, at the end of the day, that we will convert the chances as we did, certainly the home game a few weeks ago against Fulham.

“West Brom is becoming a must-win, so we have to go all out without being over anxious or over adventurous because if we start leaving back doors open and start conceding too many goals.

“The chance to catch up is getting a little wider and wider each game when you don’t pick up points.”

Despite the defeat against the Gunners, Allardyce insisted there were plenty of reasons to be upbeat when analysing their performance on Boxing Day.

He added: “But we have to take a lot of positives out of the way we played against Arsenal and make sure we played like that, like we did at Tottenham in the cup against West Brom.

“You can always lose to Arsenal even if you play your best. It is disappointing for the lads when they have put such a big effort in and made so many chances against this team and not finished the game off.”