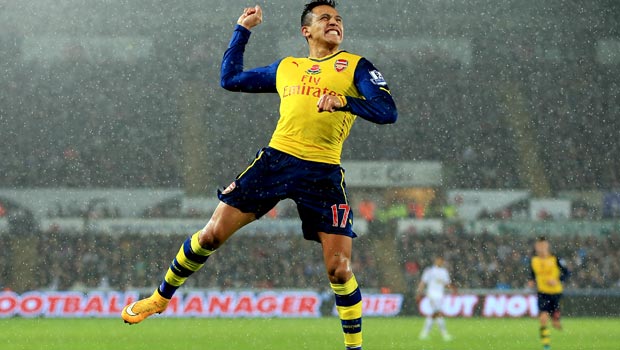 Arsenal’s big-money summer signing Alexis Sanchez is confident he can help his new club win silverware in the near future.

The 25-year-old Chile frontman, who has already scored 12 goals in 18 appearances since his arrival from Barcelona, says he is more than happy with the Gunners, despite the Londoners having only won two of their last six Premier League games to fall 12 points adrift of leaders Chelsea.

And Sanchez remains upbeat about the prospects of Arsenal winning a trophy, with the club having ended their long wait for silverware with victory in the FA Cup final last season.

He told AS Chile: “If we have the required winning mentality, if we are positive and try to win every single game, I know we can win any competition.

“I know that with this team we can win many trophies in the coming years. I am convinced. I hope to win everything here. That’s why I came.”

Sanchez has found the net in each of his last four games, scoring twice against both Sunderland and Burnley, before adding to his tally with one goal apiece against Anderlecht and Swansea City.

His efforts helped the Gunners to wins over the Black Cats and the Clarets, but Arsenal threw away a three-goal lead to draw 3-3 with Anderlecht in the Champions League, while last time out they lost 2-1 to the Swans in a Premier League clash.

Arsenal are available at 36.00 to win the Premier League title this season, with reigning champions Manchester City 7.00 and current leaders Chelsea 1.18.